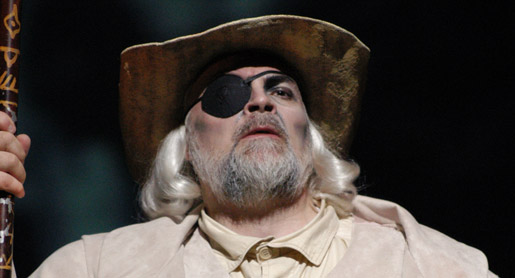 Highlights of the past few seasons include Mahler 8th Symphony (recording), Missa Solemnis, Mozart requiem, and Beethoven 9th (recording) with the Seattle Symphony, Gerard Schwarz conducting, Les Troyens with Boston Symphony and at Tanglewood with James Levine, Oedipus Rex with the Boston Symphony under the direction of von Dohnanyi, Walküre Wotan with Scottish Opera,  Walküre Wotan (cover) on the MET tour of Japan, Sachs (cover) in Die Meistersinger von Nürnburg at the MET, and the American Premier of the opera Sophie's Choice by Nicholas Maw at the Washington Opera.

Previous seasons included Elijah, Saul, Mozart Requiem, Mahler 8th Symphony, & Creation with the Mormon Tabernacle Choir, Messiah and Oedipus Rex with the Orchestre Symphonique de Montréal, and a return to New Orleans Opera for performances of Siegfried. For performances of Walküre Wotan with Scottish Opera's internationally acclaimed Ring Cycle, Mr. Brainerd was awarded the coveted “Herald Angel Award” from the Edinburgh Festival, naming him as one of the most outstanding performers at the festival.  He also sang the role of Amonasro in the production of Aida with the Scottish Opera

Mr. Brainerd has also made his debut at the Paris Opera (Bastille) in La Damnation de Faust with Seiji Ozawa on the podium, a debut in Madrid singing the title role in performances of a newly discovered opera Merlin by Isaac Albeniz, Wotan in Die Walküre with the New Orleans Opera and performances of Messiah at Carnegie Hall. Mr. Brainerd replaced James Morris as Wotan in Die Walküre performances at Teatro Colon in Buenos Aires, performances and recorded The Dream of the Peasant Grishko by Mussorgsky with the New Jersey Symphony under the baton of Zdenek Macal. Mr. Brainerd has sung Kurvenal in a performances and recording of Tristan und Isolde at Carnegie hall with the Opera Orchestra of New York and Scarpia in Tosca with Teatro Arriaga in Bilbao, Spain. He also debuted with the New Zealand Symphony as Wotan in five concert performances of Wagner's Das Rheingold - a role in which he won critical acclaim with the Arizona Opera Ring Cycle. Mr. Brainerd sang Golaud in Pellèas et Mèlisande in Japan with The New Japan Philharmonic under the auspices of Seiji Ozawa. Also with Ozawa, were performances of Madama Butterfly with the Boston Symphony and Damnation of Faust with Ozawa at the Saito Kinen Festival in Japan.

Mr. Brainerd's versatility encompasses not only the Wagnerian repertoire of Wotan and Gunther in The Ring and the title roles in Die Meistersinger von Nürnberg, but also many roles in the Italian and French operatic repertoire, including Scarpia in Tosca, Falstaff, Commendatore in Don Giovanni, Villains in Hoffman, Golaud in Pellèas et Mèlisande and Mephistopheles in The Damnation of Faust. Mr. Brainerd is also in great demand as a concert artist throughout the world singing a vast repertoire from the Baroque to Modern!